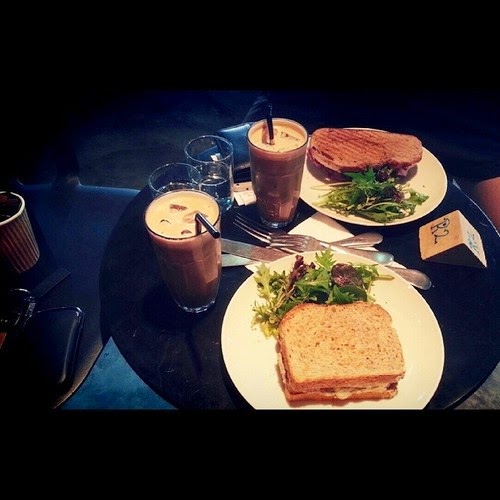 before i stepped into the cafe today, i honestly only had a very vague notion of having heard the name Necessary Provisions being thrown about before by my chichi coffee drinking friends who spend weekends hunting down the latest and coolest haunts with the best cuppas.

but i heard it again today though when it was suggested by my fellow friend of leisure after a fairly lazy walk around bukit timah, and i was really glad we headed over afterwards.

tucked away in the bowels of Toh Tuck (that's just off Jalan Jurong Kechil, for those as lost i was before i finally made it there), it is a rather unexpected place. almost painfully edgy and cool, it stands out from its charmingly quaint surroundings. i found a provision shop in the row that looked like it never made it out of the 80s. it sells biscuits in the huge square tins and grated coconut from the grating machine sitting at the roadside in front of the shop. but i digress.

while i loved the dark and eclectic design aesthetic (it rhymes!) of the cafe, the really polished and sophisticated display of its goods on the dark wood shelves and tables, it does come across as trying a little too hard, particularly given the super homey feel of its surroundings. food wise, i had the sardine melt while my friend had the beef pastrami sandwich. we both agreed that the sandwiches were hearty, tasty fare and quite satisfying after our morning hike. also fairly good bang for the buck at $9.

what i was slightly disappointed about though, was the coffee. granted that i didn't have a proper coffee but the iced chocolate with a shot of expresso, the end product was a rather sour concoction that didn't quite sit right on the palate. i would like to think that perhaps its just this product that's a bit of a miss and certainly i am intrigued enough by the place to go back again some time to try the coffee proper.

find Necessary Provisions at 21 Eng Kong Terrace, Singapore 598993. it's closed on mondays and first tuesdays of each month mind.